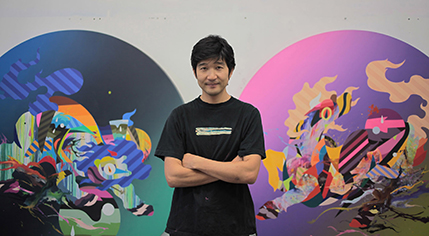 This month, the Brooklyn-based Japanese artist, Tomokazu Matsuyama, is coming to Luxembourg for his second solo exhibition at Zidoun-Bossuyt Gallery where he will continue the exploration of his dual US & Japanese heritage in his imagery.

Tomokazu Matsuyama will debut a selection of new paintings and a series of steel sculptures rendered in monochromatic gold and silver. With this collection of works, the artist traces the canon of the history of Western art while filtering it through his idiosyncratic imagery, where the flatness of Eastern painting meets the bold vigor of American pop.

Matsuyama’s work responds to his own bi- cultural experience of growing up between Japan and America by bringing together aspects of both Eastern and Western aesthetic systems. His practice repositions traditional icons within a broader global context in order to create a distinctive style that resists cultural categorization and embodies what the artist refers to as the “struggle of reckoning the familiar local with the familiar global.” By raising questions of national and individual identity through the formal qualities and subject matter of his paintings, Matsuyama examines the “natural chaos” of our social environments and challenges viewers to confront their own conceptions of cultural homogeneity.

Matsuyama is influenced by a variety of subjects, including Japanese art from the Edo and Meiji eras, classical Greek and Roman statuary, French Renaissance painting, post- war contemporary art, and the visual language of global, popular culture as embodied by mass-produced commodities. He approaches his sculptural works in a painterly fashion, playing with color, shadow, and depth to achieve an effect that is simultaneously three- dimensional and flat, creating an immersive experience where viewers are invited to physically walk around and through the forms.

The sculptures refer to diverse art historical references ranging from Italian Renaissance sculptures like Gian Lorenzo Bernini’s bust of Louis XIV at Versailles to a Hadrianic copy of the iconic Greek Crouching Venus statue rendered by Doidalsas in the 3rd century BC, and from the French Neoclassical painting Napoleon Crossing the Alps by Jacques-Louis David to Edo drawings by the Japanese artist Katshushika Hokusai. Through this series of sculptures, Matsuyama also plays with image distortion: as the viewer approaches each piece from a different angle, the figurative essence of the piece begins to dissolve and morph into something different and less recognizable, presenting a completely new experience of the work.

The new paintings feature the expressionless figures against expressive floral patterns, surface covered with real flowers and floral wall patterns which artist calls « Deco-florative « derived from traditional Japanese techniques and sensibility, that are characteristic of the artist’s work but also incorporate abstract imagery, as they are conceived as an homage to Abstract Expressionist painters of the New York School. In order to create an effect that mimics a gestural approach, the artist utilizes a painstakingly precise technique of layering paint in a very controlled manner. Matsuyama says, “While

My work is about integration into a new world order of urban cosmopolitanism, what remains is the underlining of specific iconographies that inform my cultural and historical past as Japanese. The work is placed, somewhat non- sensibly, into another context, in which I am constantly trying to reinterpret what the image means within a shifting global dialogue.