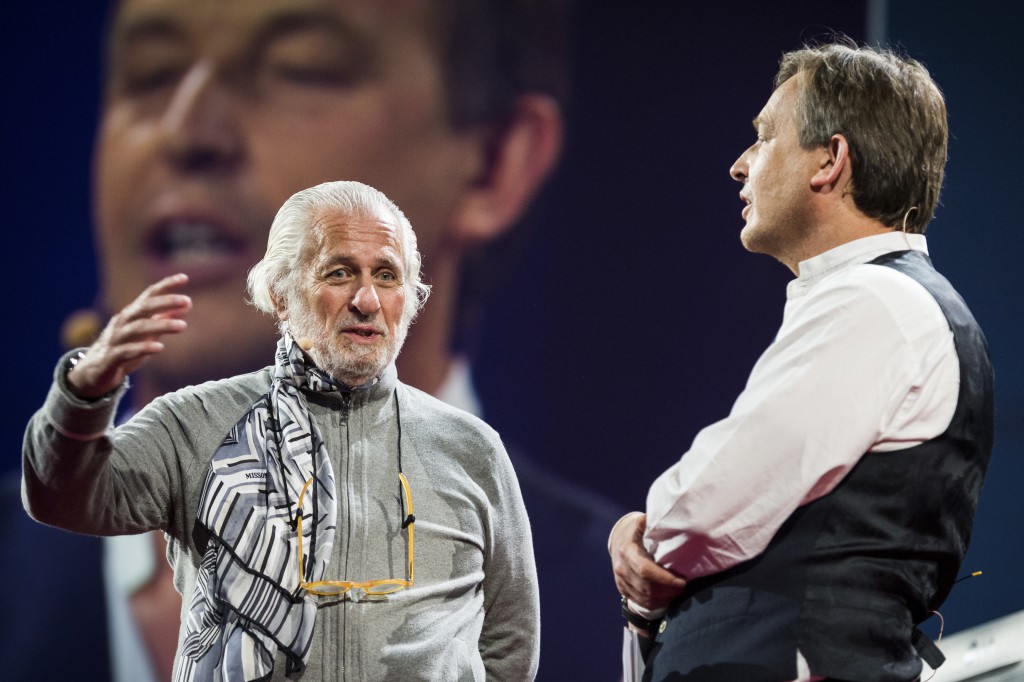 Twenty-five years ago, in your book Information Anxiety, you were expressing concern about the gap between data and knowledge and between what we understand and what we think we should understand. What is this breach and how does it cause anxiety?

« Ok, let’s get back to the beginning. Everything else I do, to me, is the ordinary basic way of thinking about this. When you go back 25 years and talk about the information anxiety, basically is the fact that I read things that I don’t understand. I look at the front page of the newspaper, I read the headline of the New York Times or some story – even if it’s a long story in continued – and I can’t hope to find the simplest of questions answered. What is the fact? Where did it take place? I just can’t get the simplest question answered! »

« There is a big gap between what we think is information – a word that is mostly dominated by the part of the word inform – and what we think information should be. And it doesn’t inform me. So if information doesn’t inform me, there is obviously a gap between what we think should inform us and what actually informs us. And that is the anxiety we have. All this stuff around us we should understand because after all it’s words – it’s in the New York Times, in the Wall Street Journal – it’s something that we think should be understandable. But it isn’t. And we don’t understand school; we don’t understand most professors because most professors have the disease of familiarity: they are so familiar with the subjects that they miss the way in. The door is some place over the horizon: they want you to lose those few first steps and so you never understand the subject. And what is stupid is just that they don’t understand what it’s like not to understand. They’ve lost the ability a long time ago. That ability is my fundamental continuous continuum of thought process all day long: understand what it’s like to not understand. »

It seems that you are a pretty atypical personality. How would you describe yourself to someone who does not know you?

« I see no alternative but designing your life. To me, that’s the big design problem. I don’t understand the idea of asking somebody « How is everything going? », because it’s a moron question. I can’t answer that question or nod to something I don’t understand, making believe I do understand it: it’s something that seems interesting but I want to seem smart. I don’t understand that continual lie of things. Well, other people do and I won’t criticize them. That’s fine for them. »

« I don’t find that doing what I do is in a list of ‘unusual’: I’m on that side of the street and I want to get to the other side, so I figure out a way of going there without getting killed or hurt. It’s a journey. It’s your own journey and you do it by yourself. And so I find that I am ordinary, that I have an ordinary life that’s interesting to me, and would not be interesting to others. I accept the fact that comfort is not my friend even though I was taught that one should always strive for comfort but I don’t find that unusual. It was an early discovery that actually terror is my friend and that along with terror, I’m confident; not in a braggadocio sense but I know how to do something because I’m always kept in check by this gentleman walking right next to me and in my same body of terror. To me, everybody must feel that way. Or at least it’s my operative to feel that everybody else feels that way because it would be really uncomfortable to feel that I was different. »

Do you agree if I say that boredom is instrumental in your motivation – your intellectual engine?

« To me, the word interest is. Learning is remembering what you are interested in. Tell me something wrong with that statement: Learning is remembering what you are interested in. If you don’t remember it, you haven’t learned it. You don’t remember anything that you are not interested in. So learning is remembering what you are interested in and that’s the antithesis of how every educational system is setup. If you just did a very simple mathematical equation, you would see that the educational system is worthless. It’s top-down: people reading from the book they want you to buy because they wrote it and it’s in the college book store. And they read it to you. It should be from the bottom-up. No matter what you’re interested in, you can shout out a subject and I will build the whole course of study on that, whether it’s automobiles or chairs (he’s looking around the room and at the window, Ed. note), whether it’s the making of a book, a book itself, typefaces, graph, painting, anything you say. I can connect to everything else and make the all field of study becomes of your interest and guide you through a world of interesting things. That’s the way you learn, the way I learn, the way everybody actually learns, it’s learning itself. »

« We don’t have a board of learning; we have a board of education. Education is from the top down. We keep on saying the educational system is broken, and all the effort and the big money now is going into making this broken educational system bigger through technology. And we’re going to have a bigger broken system. I think that the system doesn’t work and that there shouldn’t be teachers but guides that help you with your interest connection. Perhaps that can happen; certainly not in my lifetime. I can only talk about how I live my life. »

In 1996, you published Information Architects, in which you underlined the importance of the structure and design of data for creating clear and efficient communication and learning processes. The current Big Data wave seems to confirm how right you were at a time when the information age was in its infancy. What is your vision of information design and of the role of data architects in the light of the tremendous amounts of data people and organizations have to deal with today?

« I was asked to give a keynote at a Forbes economist conference in San-Francisco a year and a half ago and the subject of the conference was Big Data. I gave the keynote and said: it’s worship. I’m not interested in Big Data. I’m interested in Big Understanding. This Big Data, number crunching or more stuff has nothing to do with humanity. It’s a Big Understanding I’m interested in. As we have access to more data, we have to put it through a filter to make it into Big Understanding and nothing has been done to do that. The bragging rights go to the people handling more data, not their understanding. It’s very similar to the climate change. If you have a billion dollars, you should spend half a billion trying to lower the carbon footprint and half a billion on how to prepare for the rise in temperature which is going to occur anyway. In other words, almost every issue is bifurcated into how the world is prepared for something, what are the unattended consequences of everything. You just can’t have Big Data without Big Understanding. You can’t have temperature change without preparation. So I just look at everything in a bifurcated way: I have two ears, two nostrils and two eyes. I don’t park my head in the middle but I think I should!

You are known as the creator of the TED conferences and as a prolific writer. What projects are you working on today and what would you like to develop in the future?

I created TED (Technology Entertainment Design) in 1984, ran it for 18 years, and I don’t go there anymore because it has lost the fundamentals of what the intention was. Not the TEDx part, which is very good – I didn’t invent it and I didn’t run it during my tenure – but the fundamental take of the TED conference itself has been denigrated.

I’m working on two major projects. One is the continuation of the Urban Observatory and if you go online, you’ll have fun: look at the Urban Observatory web site (http://www.urbanobservatory.org, Ed. note), and you will see. I think we have 78 or 80 cities that you can look at. Pull up 3 cities and look at any one of the 23 subject areas all presented in a new cartography I’ve invented which is a comparative cartography, because no two cities in the world do their maps at the same scale with the same legends. Therefore, there is no common language, there’s no way cities can talk to each other. If you and I weren’t speaking English, we couldn’t have this conversation. We need a common language. You need a common language in science but there is no common language in science. Astrophysicists and small particle physicists look at the periodic table differently. And there are several specific words or physics concepts they look at a different way. Different fields of medicine use actually different measuring systems, sometimes the English system, and sometimes the metric system. How are we going to be operated on with those two different systems? There’s no common language in urbanism which is obviously our largest invention, I mean the city. 51% of the people live in cities and they will be 70% within 25 years.

The second project is a major book called Understanding, Understanding. It’s one of the big breakthroughs in my life that will be out in a year – I hope you’re healthy and you’ll live that long! It’s a book that is shocking me, that is surprising to me as I’m discovering the myriad ways, fundamental ways of understanding, a magnitude larger, more esoteric and idiosyncratic than I ever thought, as I am doing this book. It’s a very exciting book about what understanding is and there are no four or six different ways or information theories on how to understand. I find it much more complex and exciting and simpler than I thought, which makes it very interesting to work on.

TED: The Greatest Platform Worth Sharing: