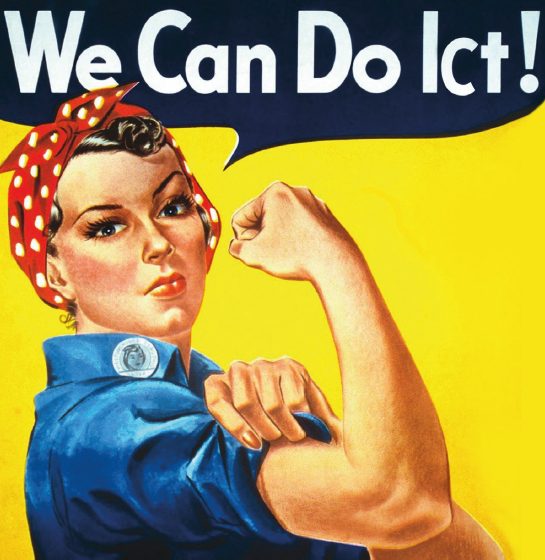 Our lives are dominated by technology and we are surrounded by innovation. Female researchers are not leading the industry, yet, the future of science is in their hands.

The Fields of science, technology, engineering and mathematics (STEM) have always lacked women. Men dominate those sectors as they almost seem to repel the opposite sex. The topic has been debated in many research papers, however explaining the gender gap remains complicated.

Women in male dominated industries are now embracing prestigious careers and the male-female ratio of university graduates in business, medecine and law is almost equally divided. However regardless of how you interpret the stats, the number of women in STEM fields is not increasing.

A study conducted by the UNESCO Institute of Statistics shows that only 28% of the world’s researchers are women. Another significant figure: women are 50%-70% less likely to complete a Master’s degree in STEM subjects than their male counterparts.

The study «She Figures 2015», published by the European Commission, investigates the level of progress made towards gender equality in research and innovation in Europe. It shows that women are still under-represented in science & technology occupations. At the EU-28 level, women represent 40,58% of the labour force in science and engineering. In Luxembourg, the gap is bigger: women account for only 27,66%.

Another study, called «Gender in Research and Innovation», released in 2012 by the European Commission, shows that in science and engineering fields, only 35% of PhD graduates were women. It also highlights that women held 32% of entry-level positions at universities while only 11% of them were full-time professors.

«Men are good at maths and sciences while women excel in foreign languages» is the main stereotype – and probably the oldest one – but this is certainly not the only explanation.

The problem actually starts in high school. While parents rarely encourage their daughters to explore STEM field, young girls are also often discouraged by their teachers when they express a wish to pursue science, technology, engineering or mathematics at university. Schools have the responsibility to educate young people in STEM but it seems they don’t give equal opportunities concerning their career choices. Seen as role models, teachers often influence their students’ choice. It has been proved that having a female teacher in subjects traditionally taught by male teachers deeply increases female students’ skills and the likelihood of them majoring in science or mathematics.

Moreover, sexism still exists in our society. Consider the pink and blue color stereotype. Look also at children’s toys: they often send a message that girls are destined to be homemakers or caretakers. According to a study commissioned by Microsoft, male students are more likely to pursue STEM studies because they have always enjoyed games and toys that are focused on their chosen subject area.

In addition to that, popular culture plays an important role. TV shows and movies influence girls who grow up seeing women in positions such as doctors or lawyers. As women represent only 7% of the computer scientists in movies and 16% on TV shows, this may lead girls to believe this kind of career is not appropriate for them. Media are therefore to be blamed as they convey the image that most of our society’s scientists or engineers are men.

The STEM gender imbalance brings another issue. As long as certain fields continue to be male-dominated, the male-oriented culture is perpetuated. This culture has difficulties to accept women and, as a consequence, dissuades young women from choosing STEM fields, despite them having extraordinary abilities.

Nevertheless, throughout history, women achieved formidable accomplishments in these male-dominated fields, notably Marie Curie who conducted pioneering research on radioactivity and was the first woman to win a Nobel Prize. Or Marissa Mayer, the CEO of Yahoo, who developed a passion for computers – although she grew up thinking she would be a doctor – and spent 13 years at Google, working in product development.

Another inspiring example is Debbie Sterling. Graduated from the University of Stanford with a degree in mechanical engineering and product design, Debbie did not know what engineering was until one of her teachers suggested she studies during her college years. As an entrepreneur amazed by the lack of toys that introduced girls to engineering at a young age, she founded GoldieBlox, a product line of toys to capture girl’s imagination and natural problem-solving abilities.

More and more initiatives in process

To help and guide women into STEM fields, Karen Purcell – entrepreneur and president at PK Electrical – has a suggestion: she expects professionals to act as mentors. « Most successful women say they reach their career goals thanks to their participation in mentorship programs. Teaming up with a mentor may could bring important benefits to women in environments like science or technology ». She adds that mentors can be men because « they should not be viewed as monsters or enemies in the STEM fields ».

Nowadays, more and more groups promote STEM for girls. In the US, Girls Who Code introduces young women to technology and coding in high school. Its goal is to make it fun and it aims to provide computer science education to one million teenage girls by 2020. By partnering with more than 25 leading companies that have promised to hire graduates from the program, Girls Who Code want to help them to find a job using their new skills.

HealthTech Women should also be mentioned. This non-profit organisation empowers girls and women with the expertise and network to revolutionise the future of medical technologies, leading disruptive innovation within the healthcare sector. Maxine Mackintosh, who is currently taking a PhD at University College London in Neuroinformatics, is also the UK managing director of the organisation. She believes that having people around you who have similar mindsets and goals can have a real impact: « Surround yourself with positive, ambitious and supportive people. As you strike out on your own and start to build your own career, meet those magnetic and engaging people and bask in their aura ».

In Luxembourg, there is Girls in Tech (GIT), a group that focuses on the engagement, education and empowerment of girls and women who are passionate about technology. Created in 2007, Girls in Tech aims to accelerate the growth of innovative women who are entering the high-tech industry and building successful startups. Also in Luxembourg, «Geek Girls Carrot», a community for women interested in ICT, as the mission is to promote and encourage women to pursue a career in IT.

As gender balance in research was a main focus during Luxembourg’s presidency of the European Union Council in 2015, the report «She Figures 2015» shows that Luxembourg lags behind in science and technology when it comes to gender balance; to count of this the National Research Fund (FNR) launched an initiative a few weeks ago. The FNR plays an important role in recruiting researchers thanks to its programmes called Attract and Pearl and is now appealing to host institutions to increase the number of research proposals submitted by female researchers to 40% in the Attract programme and 30% in the Pearl programme.

Despite all these efforts, research conducted by the United Nations showed that the number of female science graduates is significanly lower than that of males, and that females «continue to be excluded from participating fully in science».

This does not mean that women don’t have the abilities to excel in science, technology, engineering or mathematics. Looking ahead, it’s more than clear that a lot of jobs will require STEM skills. This should offer opportunities for people, regardless of their gender.

So, let’s go girls, seize the moment, your time is now!